This 1957 Triumph TR6 is the latest machine to emerge from the Ton Up Classics restoration department. This sporting off road model was consistently a winner in it's day, taking the lead at Scrambles events such as the Catalina Grand Prix, Big Bear Enduro amongst many others. The bike of choice for many was the TR6, a popular model amongst racers such as Bud Ekins, Bill Postel, Roger White amongst others. 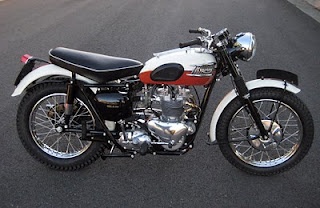 Here are a few pictures of what I started with, a rough old bike that I knew would test my skills, frozen motor and all that goes with it. 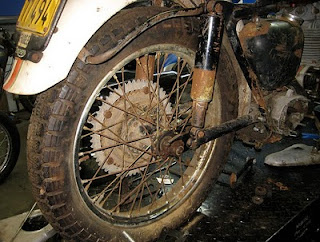 The bike came to me with 2 others, a 1957 T110 Desert Sled and 1960 Tiger Cub Scrambler, all 3 were owned by a souther california racer by the name of Bob Rickard, he raced Triumphs in the 1950's and became a winner that began riding for Honda in 1961, winning a scrambles event at Daytona in 1963. 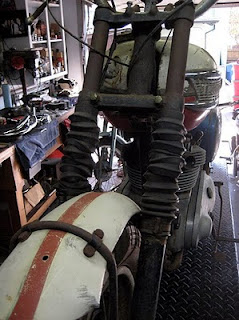 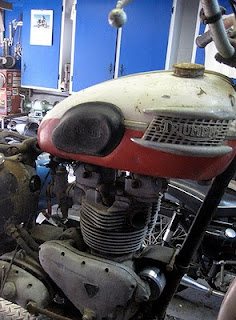 Last registered in 1959! It was parked at that time and a few parts were borrowed to keep Rickards Desert Sled racing campaign alive. 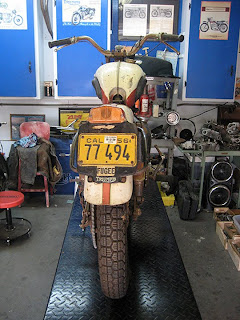 After a visit to the Alignment Shop the Frame and other Cycle parts were stripped bare and many hours of prep were necessary to rid of unwanted pitting and wear to get the finish I wanted. 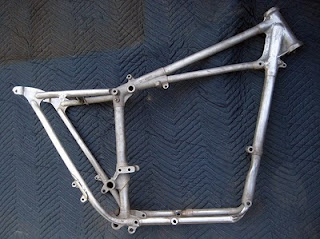 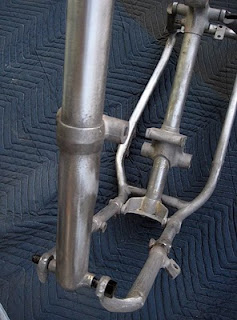 New Swinging Arm bushing are a must, nearly always worn out due to lack of grease. 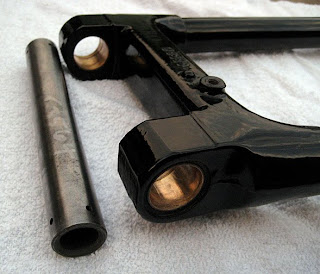 New Steering Head Cups and Cones and ball bearings were needed to replace the old pitted and worn parts, I prefer using the original loose balls and races than the available tapered needle roller bearings because I find the final fit a bit better. 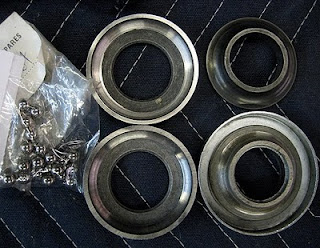 This picture shows the Front End parts ready for assembly. New Tubes, Bushings and Seals are fitted as a matter of course. 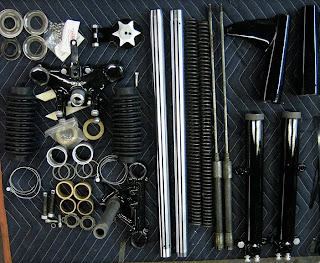 The Heart of the engine, the Crankshaft. 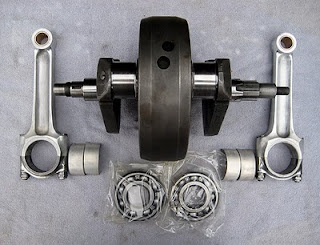 The Pre Unit Triumph used a 3 Piece Crankshaft that is held together by 6 Hi-Tensil Bolts. It is essential to split the Crank in order to clean out the Sludge Trap, years of sludge collects here and they always need cleaning. 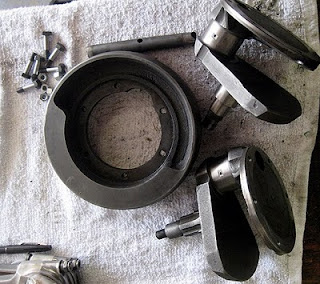 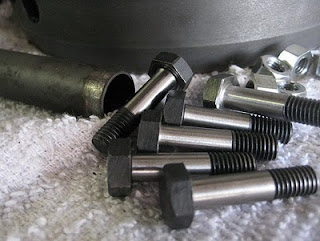 Here is a rare sight, an un-cracked 8 Bolt Alloy Cylinder Head. Pre Unit Heads were prone to cracking between the Valve Seat and Stud hole, I was suprised how nice this was considering the condition of the Engine when starting out. This picture taken after a Valve Job. 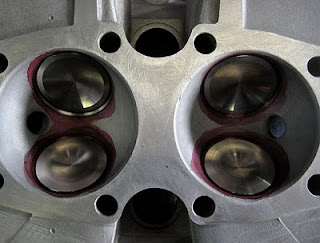 Transmission parts were donated from a spare 1963 Unit Engine I had kicking around, the original Gears were not worn but had pitted over the years sitting and I did not want tp re-use them, the parts from the unit box were in excellent condition and the swap over was simple. The only snag was with the Speedo Drive on the end of the layshaft, this had to be swapped as the unit drives are slightly larger. Obviously worn parts were replaced, in the Gearbox I fitted a new Camplate, Sprocket, High Gear Bush, Thrust Washers and the Bushes that the Layshaft run in were converted to Needle Roller Bearings. 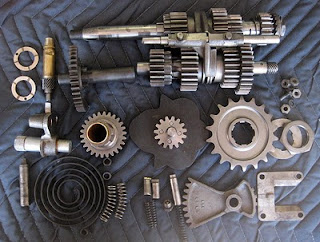 This picture shows the Primary Drive, new parts throughout. 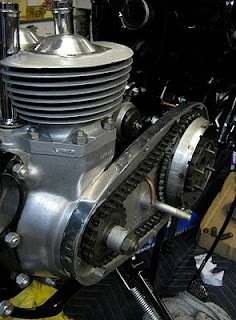 As with all my restorations, each and every part gets attention, I prefer Powder Coating on most of the Cycle parts although Tanks, Chainguard, Tool Box and Fork Covers are all professionally sprayed. Hardware is Cadmium plated, I am very aware of using the correct fasteners in all the correct places, absolutely no hardware store stuff here. 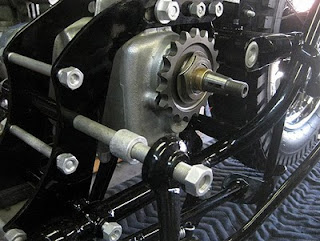 Finally a few pictures of the finished build. Is there a better looking Triumph Front Brake? 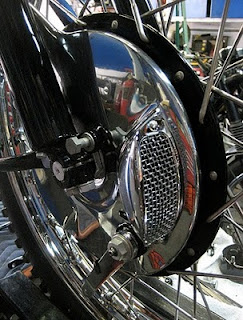 The original 376/40 Amal Carburetor was restored and put back into service. 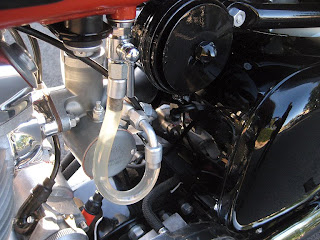 Engine and Transmission covers are polished and buffed. 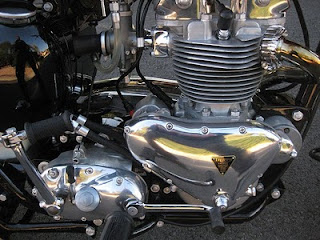 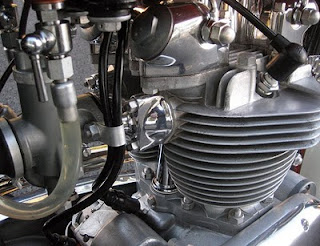 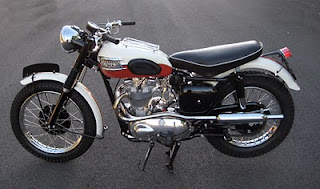 Dunlop Trials Tires, high level exhaust and quickly detachable lighting meant that this bike could be converted from street to off-road in minutes. 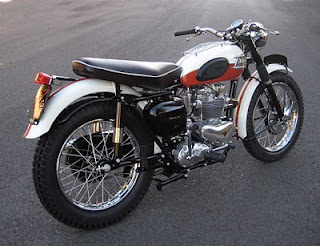 This shot gives a good look at the 1" Bars, Chronometric Speedometer, Q/D Head Lamp and the Parcel Grid. 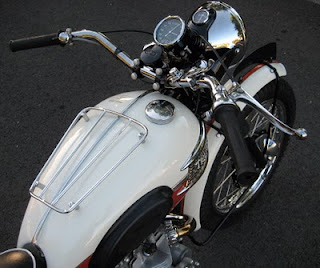 Special attention is always paid to reproducing an authentic looking seat, I find most reproduced items to be for the most part odd looking, a bad seat can destroy the lines of an otherwise tasty machine. 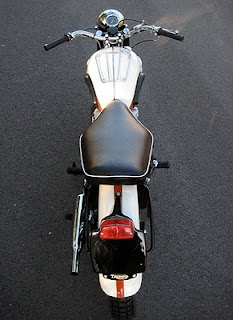 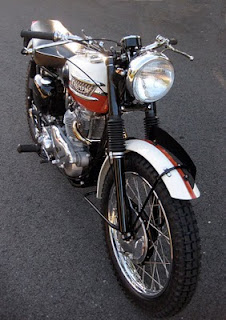 This TR6 has a new home in a collection in Northern California, I am proud to announce that the new owner has reported back to me letting me know how happy he is with this machine, not only how nicely it displays but also how well it runs.