Way over due but better late than never is this piece on the 2012 Quail Motorcycle Gathering in Carmel California. After my result at the 2011 event with my restoration of a 1957 TR6 winning 1st place in the British and European class, I was keen on attending the event again but this time i wanted to attend the Quail Ride which occurs the day before the event with a 120 mile ride through Steinbeck Country ending up with a few laps around Laguna Seca Racetrack. But which bike would I prepare for such a days riding? It was in 2004 that I was lucky enough to purchase my '56 TR5R and at that time (March 2012) had not even attempted to start it let alone take it on an extensive ride. So it had to be, I was to prep the old 500 Twin for a great weekend! 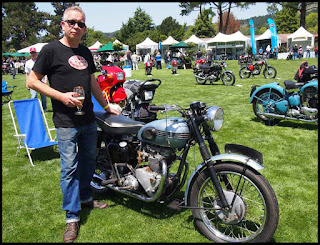 First thing first and the machine was put up on the workbench to see what was what. No spark meant the Magneto had to come off for a rebuild which turned out to be harder than anticipated in the time that I had. The Lucas K2FR Racing Magneto has a Stainless Steel Armature, not something found on every rebuilders shelf and I quickly realized that getting this one rewound would take more time than I had. My fortunes changed when I located an exchange from Ed Strain in Florida. He took care of the whole job in a fortnight. Unfortunately at the time of removing the Magneto I found a loose Camshaft Bushing witch had to be sorted which meant a complete Engine tear down. A blessing in disguise as the wise thing to do was to disassemble for a complete inspection and cleaning of all parts after the bike had sat for so long. 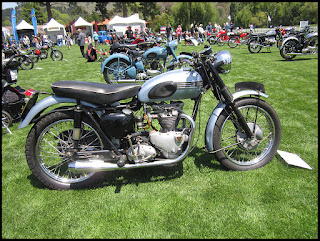 It was my goal to not change anything cosmetically, I did not want it to look like it had been touched which meant no blasting, repainting or plating. Other than the Camshaft Bushing, most other internals were in good shape. New Rod Shells and Main bearings were fitted as a matter of course. Crankshaft split apart and cleaned. With the help of Dan at Franz and Grub, Leif Lewis and Homer Knapp machine work to the Guides, Valves and Cylinder Bore was performed with the care and precision that cannot be found just anywhere, cheers chaps. 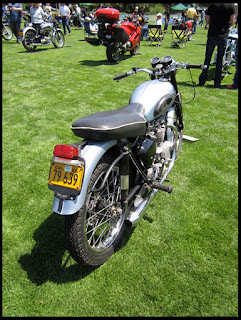 The tail chasing started, one thing led to another. New Tires were fitted at that time the Front End was treated to new Stantions, Bushings and Seals as well as the Steering Head Bearings were replaced. Anyway after 2 months of toil the Bike was ready to start and test. On a rainy day 3 days before the event I was out testing. What a trip that was in itself, a successful 1st ride. Just to have it running and back on the road felt great. The sound from those Megaphones is a treat. 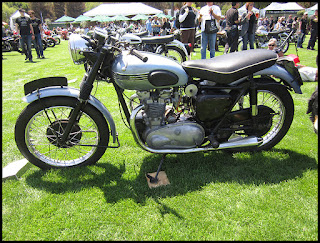 The ride itself turned out to be a great success. The TR5R performed admirably all day. About 100 riders with an escort of 5 CHP Motorcycle Officers sped through some of the best riding one can experience. Always nice to be hammering along the highway and have an officer of the law speed past you only to clear traffic so you didn't have to stop at stop signs or red lights!! Those Officers of the day were to be commended, they took great care of us and as I said, made sure we did not have to stop for anything. 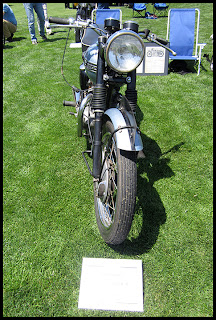 After the ride we were treated to a nice lunch, for the price of the event we were also provided a slap up meal at the Lodge in the evening which was first class and entry to the event the next day with the ability to display the bikes on the lawn. 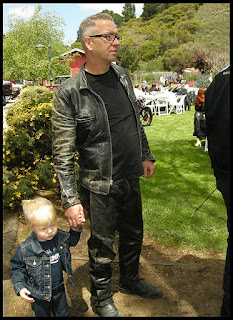 The highlight of the event for me were the "parade laps" around the Laguna Seca Race Track. The thrill of completing the days ride and now being able to thrash around this famous track was a great buzz, check out the video shot by the missus, I am the 5th rider at the 10 second mark, a fine racers line!
A great weekend had by all. I am already looking forward to this years event, I will be on my Triton, can't wait to take that around the Corkscrew! Check out this great article from the guys at Motorcycle Daily.
http://www.motorcycledaily.com/2012/05/md-spotlight-1957-triumph-tr5r