In order to replace an old '68 Triumph owned years ago, I had been in the market for a late 1960's Bonneville for quite a while, casually seeking the right bike when an ad for this bike came up on Craig's List. A deal was pounded out and I am now the new owner of this unrestored '68. 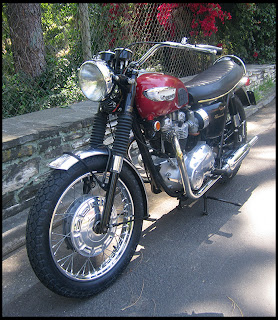 Showing less than 5000 miles, at first I had a hard time believing that this is all original without any restoration but I can be positive that it is. The only replaced items are the Dunlop Tires (the original ones came with the deal) and some rubber items such as peg and shifter rubbers. I restore bikes and have completed many but my passion is with the unrestored machines, so this was a must have for me. 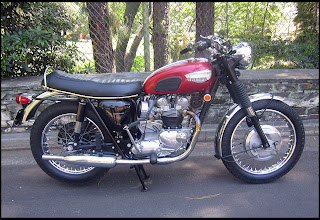 This machine has spent most of it's life in a Honda Dealers warehouse in Wisconsin. The original owner had traded it in during 1973 for a Honda Gold Wing. After spending sometime on the showroom floor unsold, it was relegated to the warehouse. When the dealership closed it's doors some twenty years later the owner sold ti to his brother. He in turn brought the bike with him in a move to Southern California, it was he who I purchased it from. Pretty cool to have a good history of the machine. 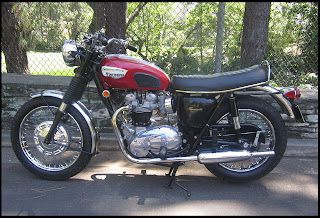 Triumph sales were booming in the mid to late 1960's and it is a fact that the years between 1968 and 1970 was the pinnacle of Triumph Motorcycles. After decades of development the 650 twin was now it's best. Tweaks to the parallel twin engine gave it the excellent power and reliability but unlike previous years the performance was now matched by the brakes and suspension. 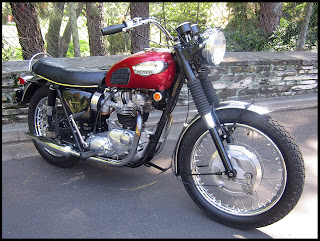 There were differences in the years between 1968 and 1970, mostly in finishes. It is the 1968 Bonnie which floats my boat out of the three years. The stylish "Eyebrow" Tank emblems were retained from the previous two years, these were replaced for '69. Also '68 models wore Stainless Steel Mudguards which were replaced by painted guards the following year. 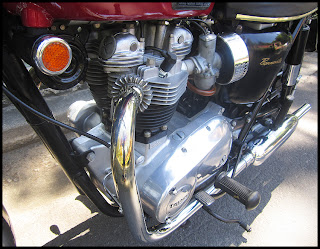 The Seat on this bike is stunning. Late '68 models were fitted with the Grab Rail on the back which continued into the '69 season but was discontinued in 1970 due to owners attempting to put the bike onto it's center stand using this Grab Rail has a lever to haul the bike back, the result of this was many broken seat pans. 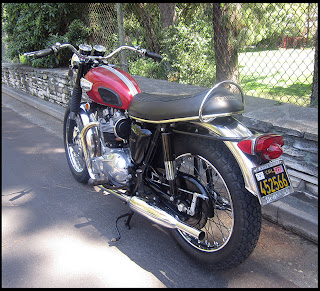 I have just assigned an original California black plate to it through the DMV'S Year of Manufacture program. An essential feature for a classic on the road today. Modern plates just don't cut it on old bikes and when you can re-assign a vintage plate to your classic, why wouldn't you? For tons more information on these smashing bikes, get yourself a copy of David Gaylin's Triumph Bonneville and TR6 Restoration Guide, a must have for the Triumph enthusiast!