What else is there to do during the first weekend of May? For me it is a weekend away at the Quail Motorcycle Gathering in Carmel. Now in it's 5th year, this event has become one of the nations best. Not only for the event on the field of the prestigious Quail Lodge Golf Course but for the Quail Ride that occurs the day before on the Friday as well as the Banquet Dinner at the Lodge in the evening. 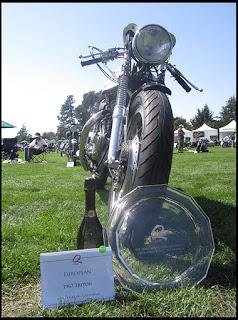 The Quail Ride kicks off from the lodge at 8.30 after Coffee and Breakfast items were laid on during Rider registration and all. The ride which would be escorted by Motorcycle Officers of the California Highway Patrol (who ensured our safety and provided us with an open pass to the highways with no stopping at stop signs or red lights) was attended by approximately 120 motorcyclists covering 110 miles through Steinbeck Country in Carmel Valley ending up with "parade laps" around the famous Laguna Seca Raceway. 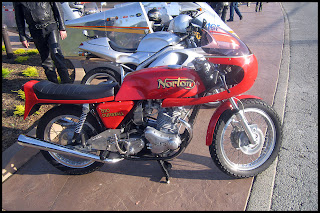 Neat Dunstall Norton ready for the off as well as this Velocette below. 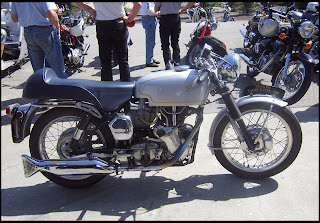 The Germans were well represented this year as always. 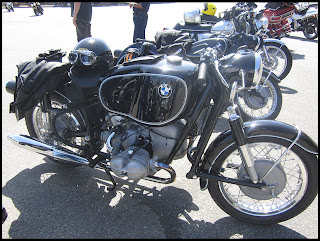 Halfway through the ride was a stop at the Talbott Winery. Refreshments and gas fill ups were available here. Robb Talbott is a keen Motorcycle enthusiast who generously invites the ride to stop by his Winery every year. Pictured below is my Triton in front of what I guess is big tank of wine. 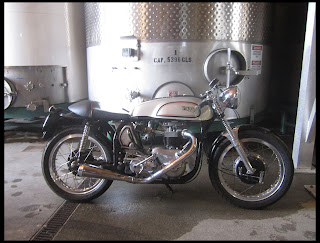 Paul d'Orleans tearing up the tarmac giving it all on his Trophy Trail. That bike ran like a top. 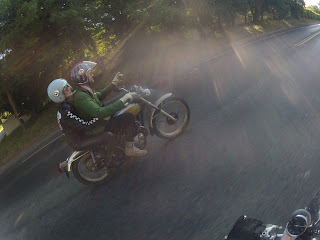 Had my Helmet mounted GoPro camera that was meant to record a movie of the laps at Laguna Seca, alas I had it on the wrong setting and ended up taking a few hundred still shots. Anyway, stitched 'em together and added a soundtrack.

After the laps at Laguna, the ride ended with a special lunch at the smashing Baja Cantina right there in Carmel. A fantastic lunch after a stunning ride. Complete enjoyment 100%. That evening was spent at a banquet dinner at the lodge. A splendid evening of fine dining, guest speakers, films and lashings of fine red wine. Didn't know it at the time but my mates and me shared a table with this Italian chap that designed the Ducati Monster. On the field the next day it was all about cool bikes in a pristine setting. 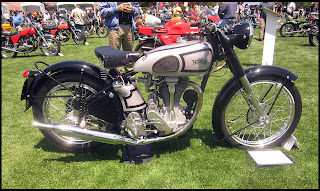 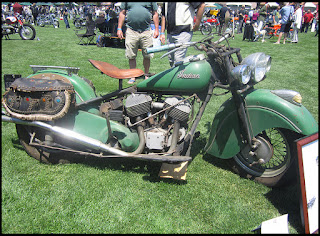 Above and below are two of a bunch of bike pulled from a barn in San Diego a few years ago. An Indian Chief and Vincent Rapide in original unrestored condition. These 2 bikes looked so cool unrestored! Gotta love that. It is the unrestored stuff that floats my boat. Another feather in the Quails Cap to have these on the lawn. As the events title states "A Motorcycle Gathering", I believe that more attention should be centered on the unrestored surviving motorcycles that are still with us. Maybe a class for the unrestored originals? 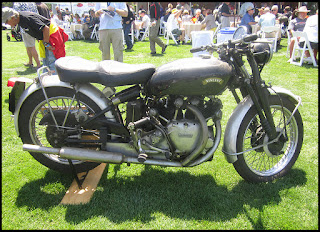 Pictured below is a 1967 Triumph Bonneville T.T. Special that I restored a year or so ago for Rob Jordan from Classic Throttle. Restored to original condition, a real hot rod of the day. It was a top of the line factory racer built in limited numbers. 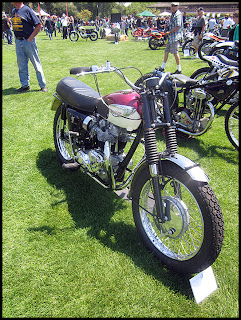 Another terrific bike is this 1952 Triumph Thunderbird owned by Wally Brookdale. Complete with period Panniers. The same Panniers that carried our back up tool kit on the ride! This Thunderbird performed flawlessly all day. 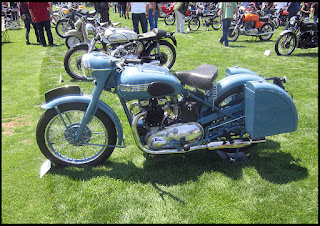 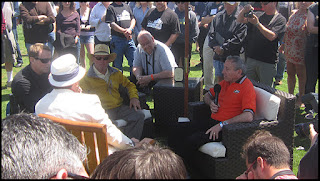 BSA Gold Star in Clubman's trim, got to have one of these one day... 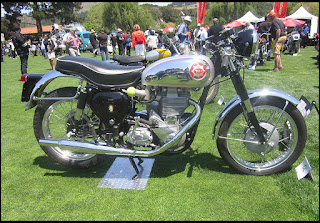 Here is a view of the show bikes in the middle of the field which was lined by vendor tents. A delicious bar-b-que lunch was laid on for all to enjoy. 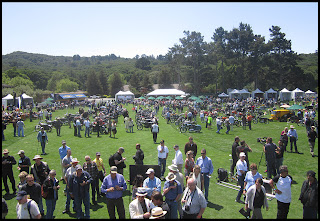 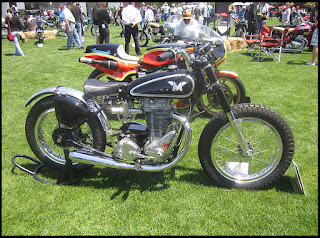 The BSA Gold Star Catalina Scrambler in owned by a gentleman called Larry. I had a chat with him about his collection of BSA Gold Stars. Behind the Catalina is a Flat Track Scrambler that actually won an award presented by Mert Lawwill, picked by him as his favorite bike on display simply because it is what he started out on back in the day. 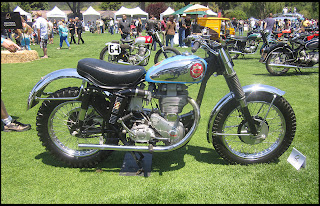 Then at around 1:00 pm came a special moment for me. I was summoned to the podium by event organizer Gordon McCall to speak with representatives from Cycle World Magazine. It was here that they asked me a few questions about my Triton. Cycle World, who are a major sponsor of the event, give an award for their favorite bike that was on the previous day's ride as well as being displayed on the lawn on the Saturday. Well, it was my Triton that they selected for this award. Bloody hell, that was something else. A proud moment for me to savor. For the labor of love that these old bike are, this award is the real and true pay day, an appreciation from peers is so humbling. 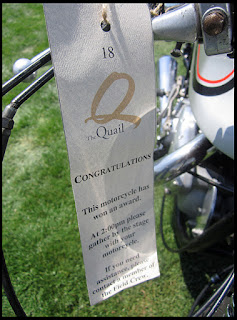 Pictured above is the tag placed on the Triton. It was selected by the guys at Cycle World because of its authenticity and looks, they wanted to choose a Bike that oozed passion and they saw that passion in the build of this Cafe Racer. 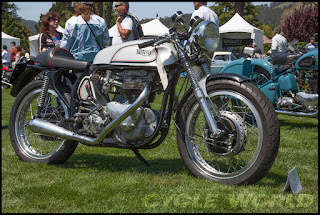 Two images from Cycle World magazine, their article on the event can be seen here; http://www.cycleworld.com/2013/05/10/2013-quail-motorcycle-gathering-photo-gallery/ 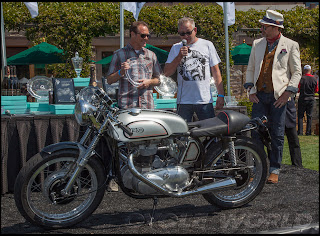 Here is clip of me on stage accepting my Cycle World award. A rather smart Tiffany Crystal Platter and nice bottle of plonk!

For a more info on the Triton, check out my earlier post. "Ton Up Triton"
http://tonupclassics.blogspot.com/2010/02/ton-up-triton.html

Posted by Jonnie Green at 7:50 AM No comments: