After several months of chasing this AJS I finally was able to purchase it and introduce myself to the world of the Big British Single. This will be something new to me as I have always been more of a Twin Cylinder enthusiast. 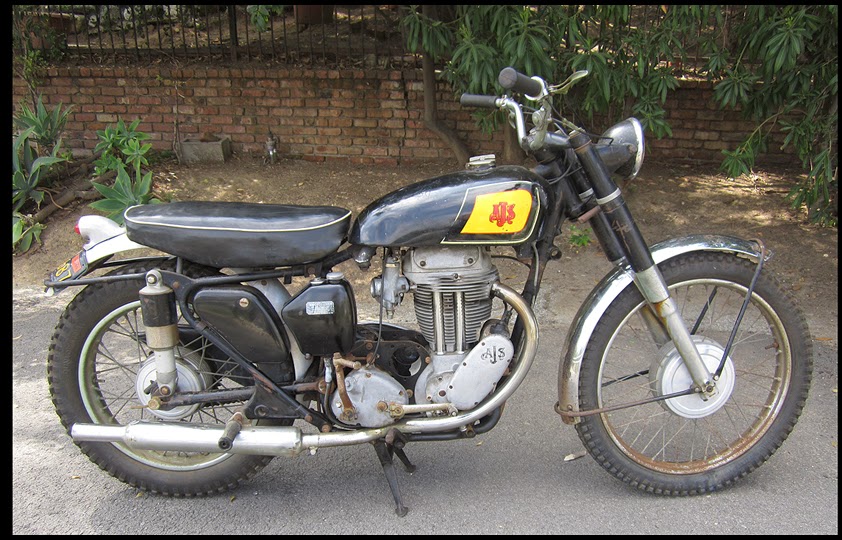 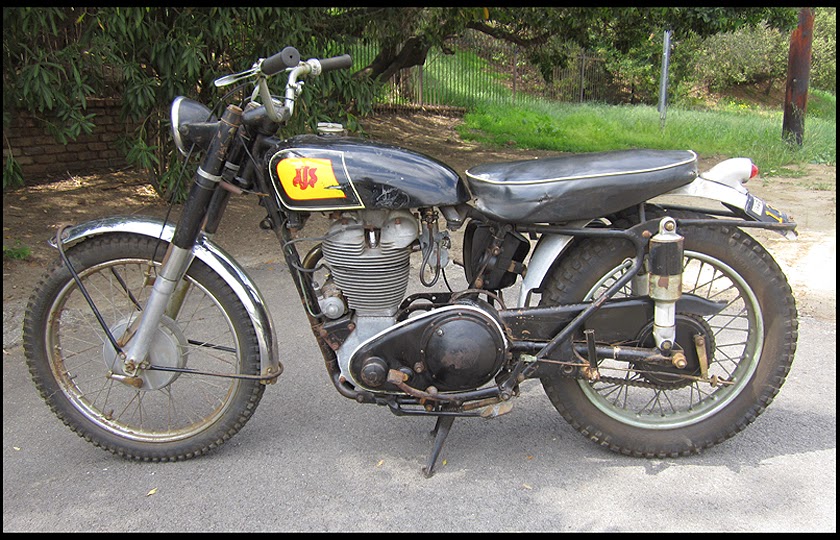 Shipped from the factory as ready to go racers, they were very successful in both Scrambling and Desert events. This bike was registered for the street with the addition of a Head Lamp and Sparto Tail Lamp although there is not one wire on the bike! Purely to stop getting hassle from the man whilst out riding on the street I am sure. 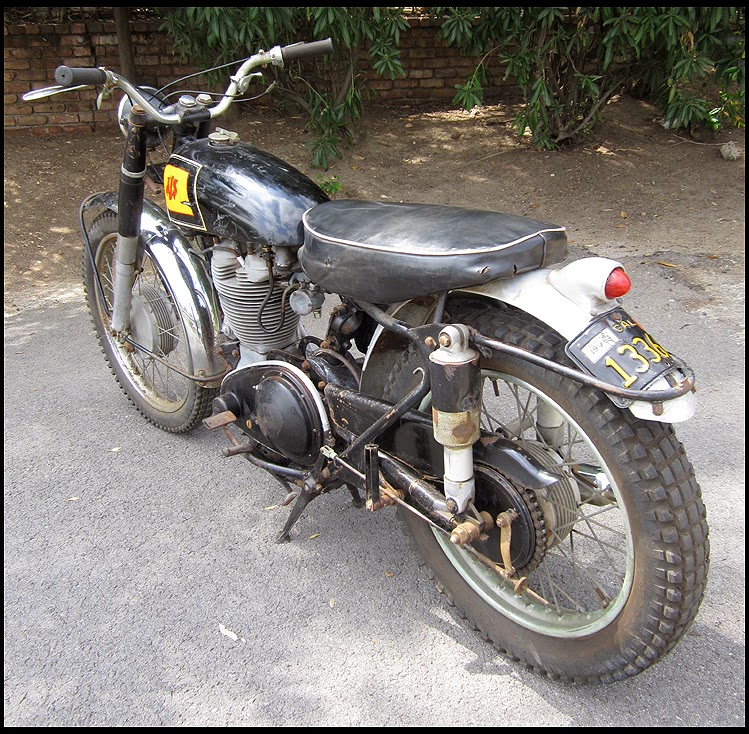 The CS Models were built in the AJS Race shop, basic Model 18's were taken off the production line and were given the business to produced a highly tuned thumper. Only around 200 CS's were produced   each year. 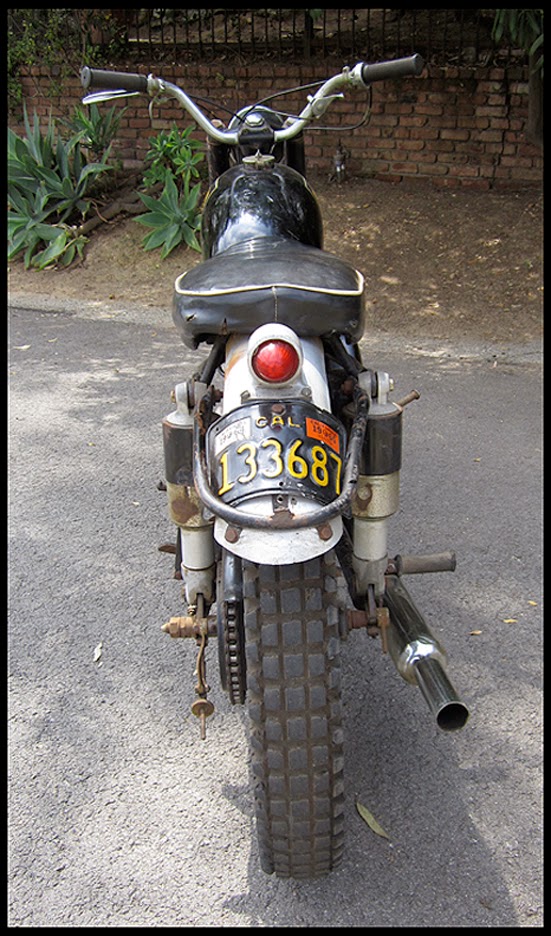 Love the hand painted graphics on the Alloy Tank, originally it would of been black with gold decal and lining. 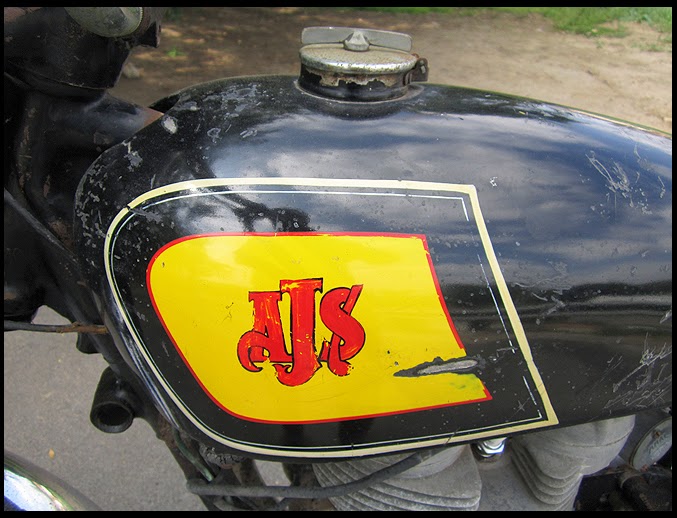 Spark provided by a Lucas Racing Magnetos, a beautiful item, green tag and all. 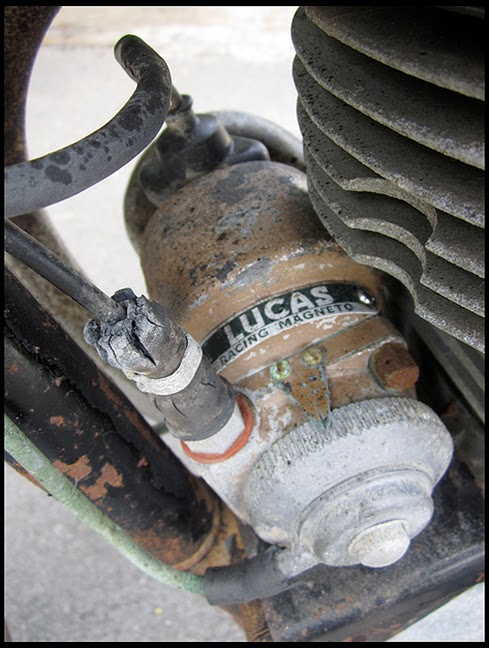 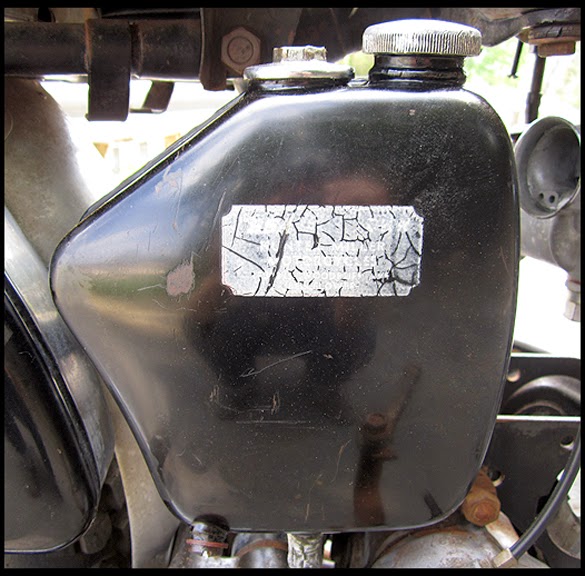 I have a receipt dating from 1965 for some engine work including a new Alpha Crank Pin and Bearing as well as a used "H" Camshaft. 1965 Being the last year the bike was registered, it had been in the back of a garage until I pulled it out this March, 2014. 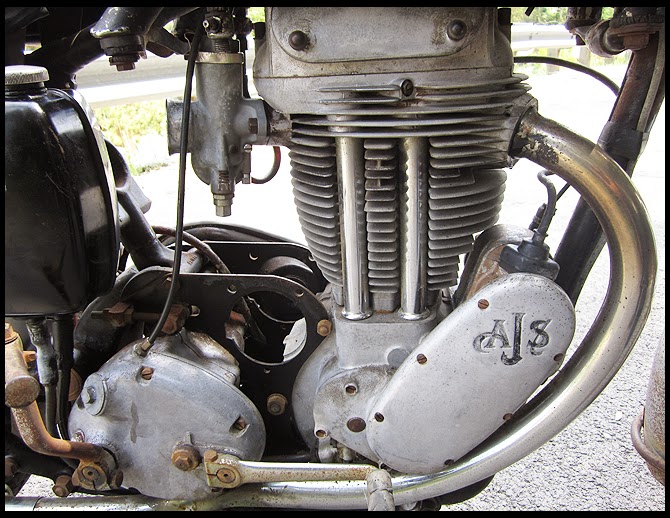 Attempts to start it were set back with the clutch slipping every time I kicked it over on the compression stroke. Removed the plates and soaked them for a while, reinstalled, adjusted and job done. 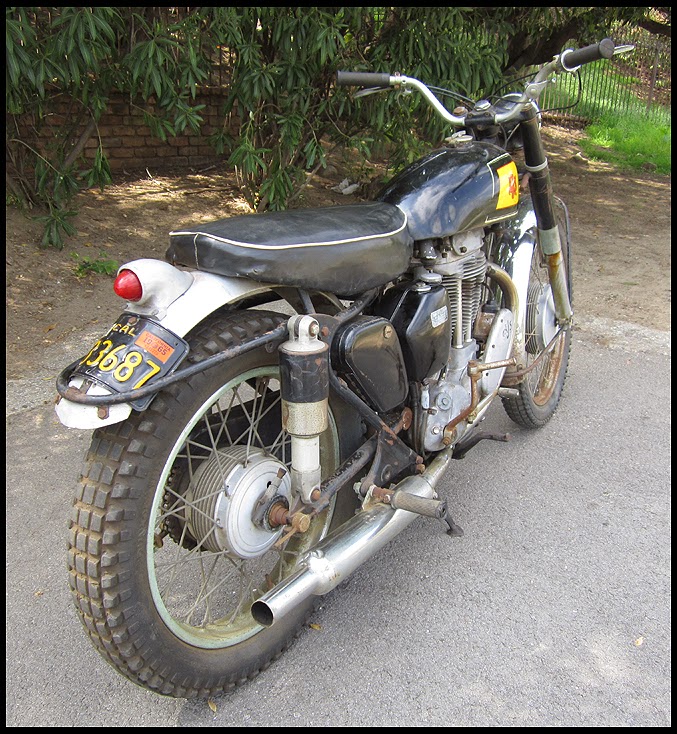 After removing the Amal Monobloc 389 Carburetor for cleaning and the installation of a new spark plug and several kicks later, the old bike fired back into life filling the nearby vicinity with plumes of white smoke. After draining the sump and adding fresh oil I was able to go for ride. The motor sounds great, very quiet and smooth with tons of power. 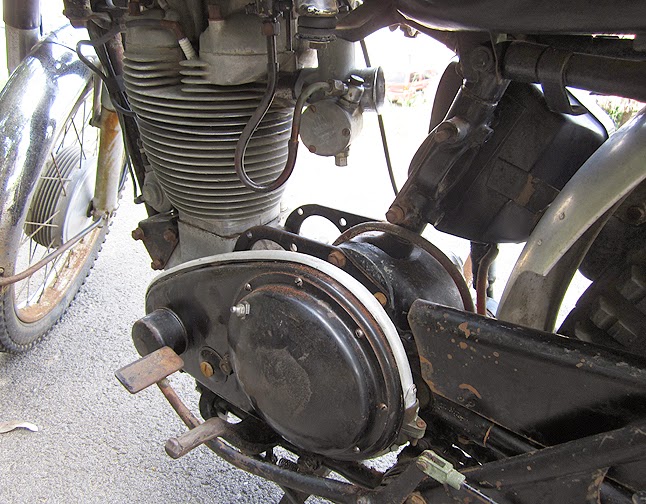 Will be looking forward to riding this over some fire trails in the near future. Until then I will be searching for some Dunlop Trials Universals.....

I recently came across the website of photographer Howard Grey and wanted to share some of his Motorcycle images from the mid 1960's with my blog readers. Howard Grey's photographic career spans over 50 years in which he specialized in Advertising and Commercial photography. The images seen here were taken for Triumph as promotional material. To me these they take on a different feeling 45 or so years later as the span of time has made them historical images not just. As a restorer of these fine machines striving for correctness in my work there is simply nothing better than seeing factory shots that display how these bikes were assembled. I contacted Mr Grey and he kindly gave permission for me to share some of the images. His website, http://www.howardgrey.com has a stunning archive of his work and I would encourage you all to have a good browse through it. Prints of his images are available for sale on the website. Thanks to him for allowing the use of these historical shots and full credit is given to him for every image presented here and I must ask that if any of these images are copied that you have the respect to contact Mr Grey for permission. 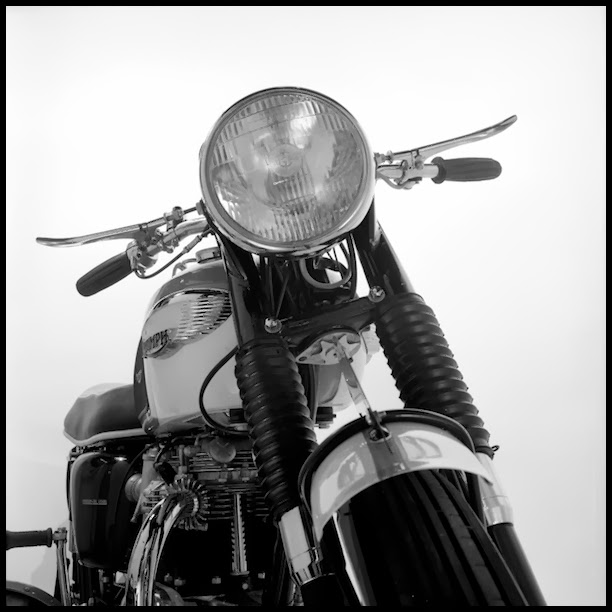 These shots above and below are of a 1967 Triumph Bonneville for the Home market. 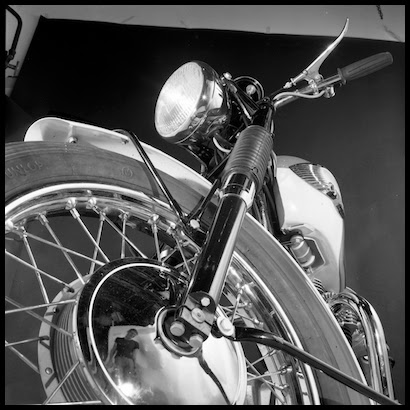 This shot to me is the most interesting of them all. Alway wandered exactly how Triumph Tank Badges were painted and now I know. The white was sprayed and then the black lettering filled in by brush. 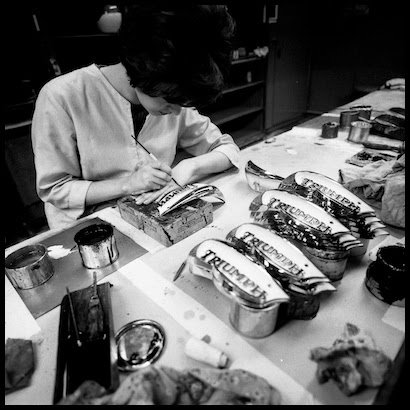 Wheel lacing was another of many tasks undertaken by ladies, a major part of the British workforce since the war. 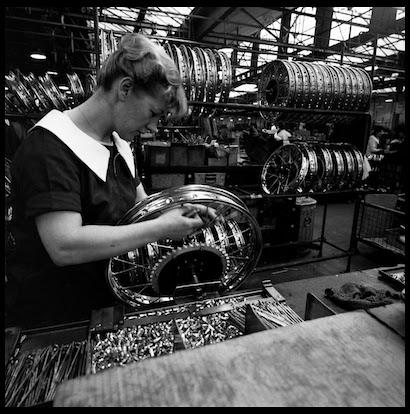 Below are some shots from the factory in 1966, machines on the assembly line appear to be C Range Tigers (thanks Jon!!). Check out the shelving stocked with new Tanks.... 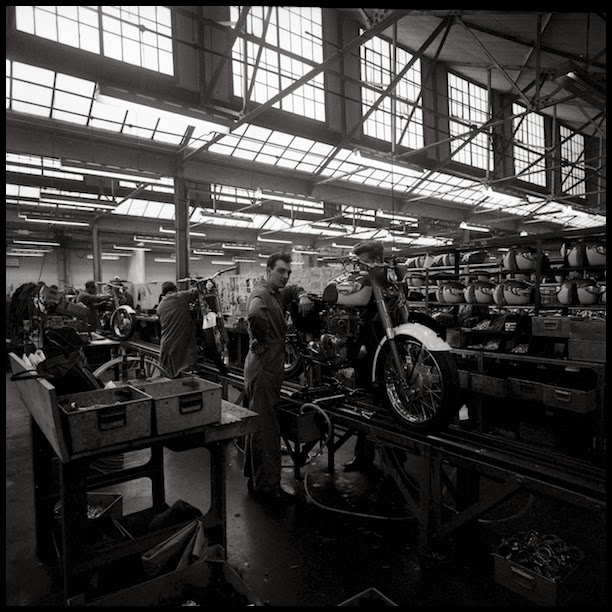 Factory test riders ready for action. This shot also displays the correct placement of the World Speed Record Holder and Made In England Decals adjacent to the Petrol Tank Filler Cap. 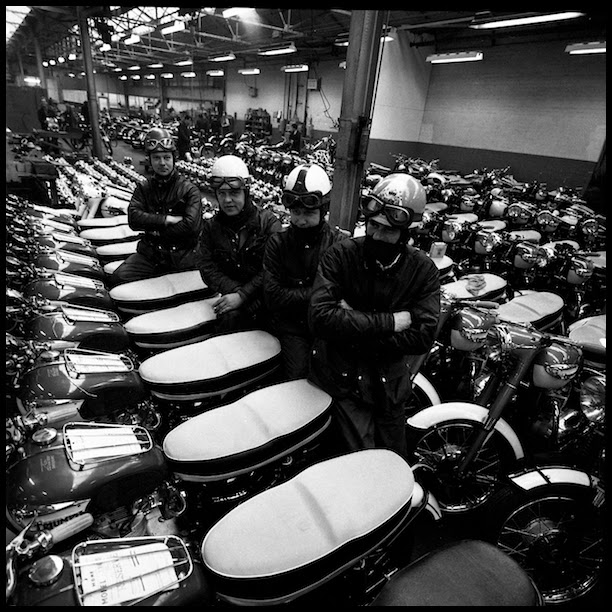 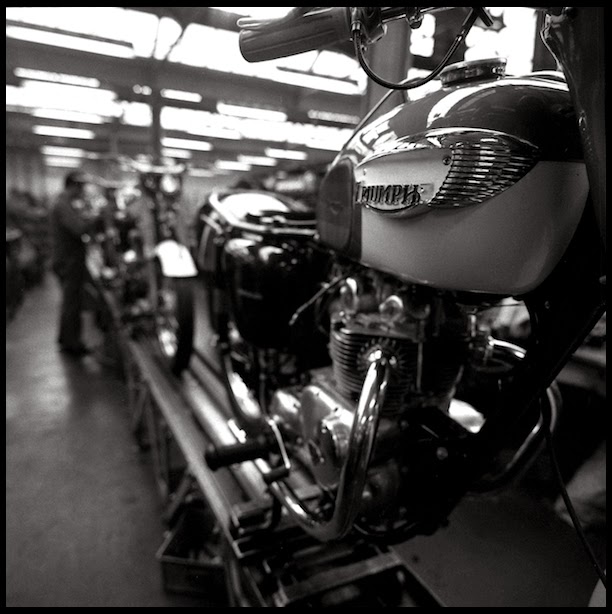 The mid to late l960's were the heyday for Triumph Engineering, they were selling tons of machines during this period, most of which came to the United States. 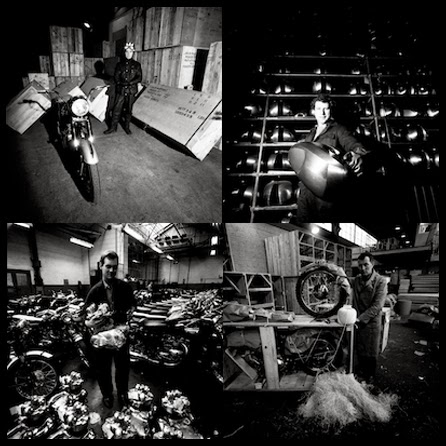 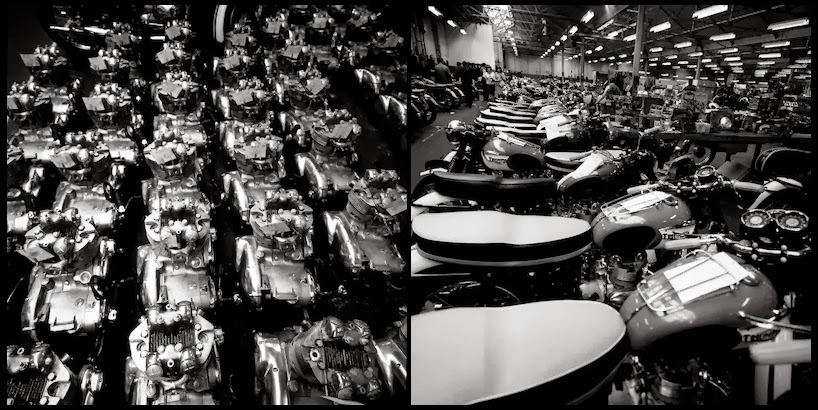 Tanks were painted and lined in house. 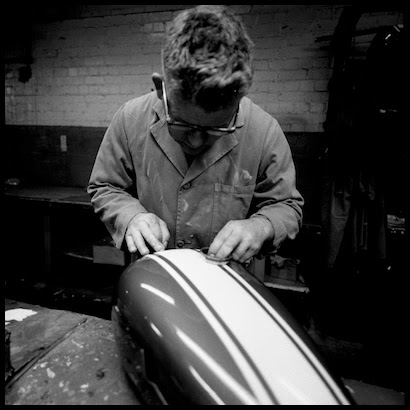 This image was one of a series for Champion Spark Plugs. Champion at this time were the supplier for Triumph. 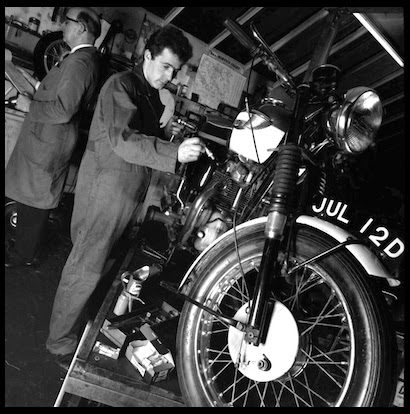 Love this shot from the design department. Machine is a Tiger 100. 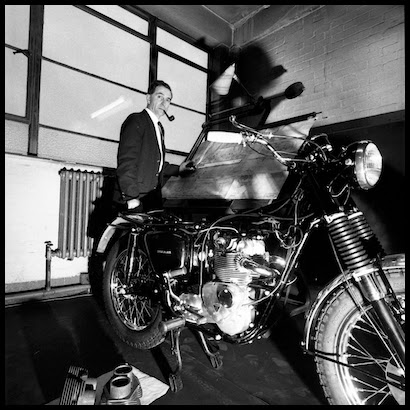 The images below were slightly earlier, the bike featured is a 1965 Tiger. I doubt they were used for promotion as it appears the rider may be having the same troubles we are still experiencing today! 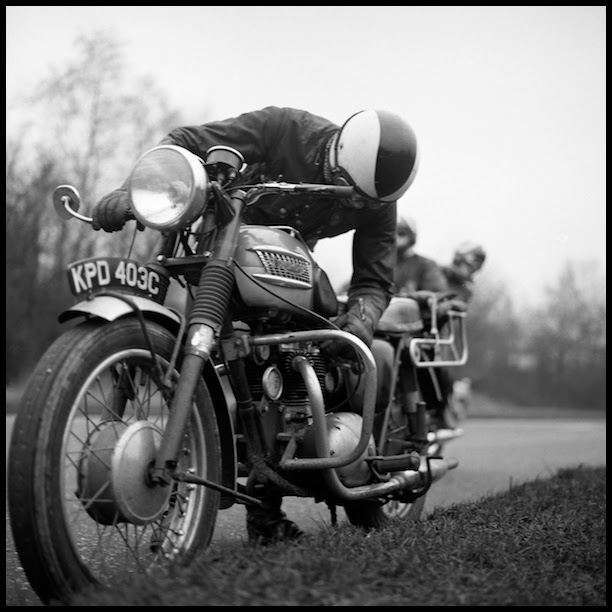 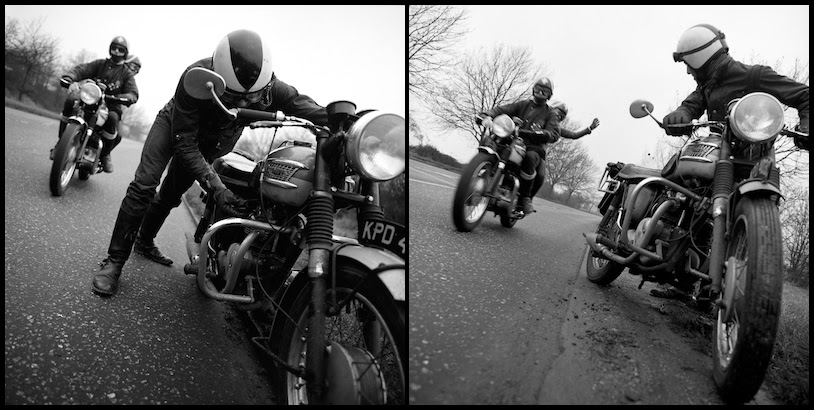 Again, thanks to Howard Grey for the use of his fantastic images. Cheers!

Posted by Jonnie Green at 10:33 AM No comments: