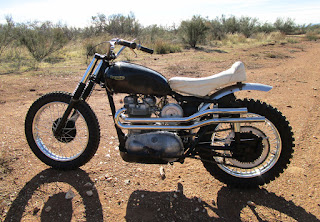 During the summer of last year I got a lead on this old Desert Sled that had been sitting for many years, things like this I cannot resist so it was up to Visalia to do a deal and bring it home. 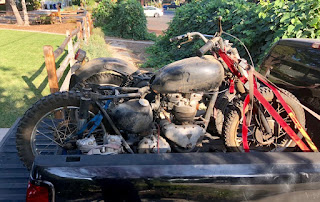 It was my intention all along to not restore this bike but perform a complete mechanical restoration. I wanted to retain the original patina but also understood that the mechanics would need sorting. 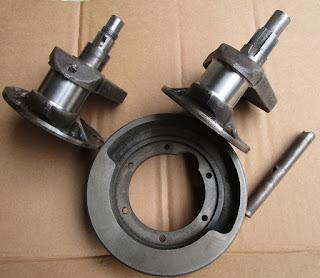 For once in a long time I found a very nice rebuilt engine inside. Upon disassembly I found new Bearings, Pistons, Valves, Guides and so on. Although surrounded by new parts the Crank appeared to have not been disturbed and after separating the 3 parts I found a Sludge Tube 3/4 full with hardened sludge. Why the previous engine builder went to all that toil without getting into the Crank is beyond me. Anyway, all cleaned out now and rebuilt with a new set of pricey Crankshaft Bolts. 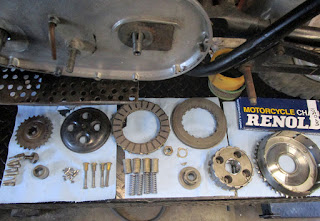 The Primary Chaincase was empty inside so new parts all round. New Rubbers in the Shock Absorber. 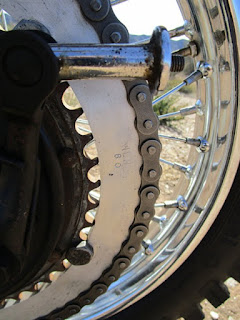 All 3 Sprockets were replaced with new Drive and Primary Chains. Check out the Webco "layover" Sprocket. These were bolted to the original Sprocket via 5 Bolts. Both front and back Rims were destroyed by previous desert abuse and rust so both had to be replaced, both laced with Stainless Spokes and fitted with new bearings and brake shoes. The Forks were frozen so they were replaces with new bushings and seals. At this time the Steering Head Bearings were also shagged so they were replace as well. Pandora's Box comes to mind. 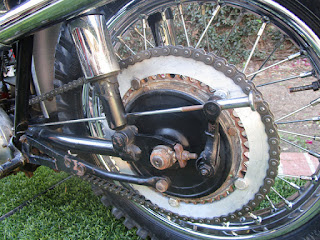 The original project came without a Seat. The obvious choice was a Bates so a dedicated search to find one was initiated. 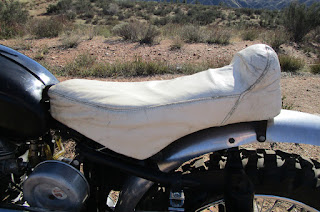 The seat is mounted via the stock front mount, rails welded to the seat pan allow the seat to sit on and be supported by the Subframe. There are then a pair of brackets at the back end bolted to the bobbed rear Alloy Fender. It is due to these rails that it is positioned where it is. This is the way Bates intended it.

When I found this Seat the seller provided the period Bates Catalog page showing this seat which is labelled on a tag underneath #3258 which as you can see is actually specified for the 54-59 Triumph Swing Arm Frames. Very fortunate to find considering the many different Seats they produced. Unique in it's white leather cover which still wears a BATES stamp in the back. 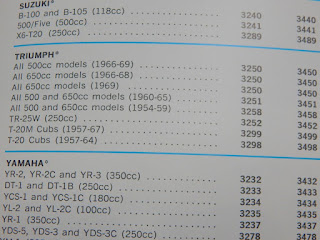 Webco sold these Air Cleaners, they were manufactured by Torque Industries in the 1960's, a company in North Hollywood. Essential to cope with the dust in the desert. 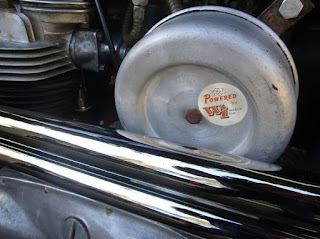 No pipes with the bike either so the choice was easy, Bud Ekins replicas. Not sure how long ago the unit 650 top end was fitted, the Head is from 1966. 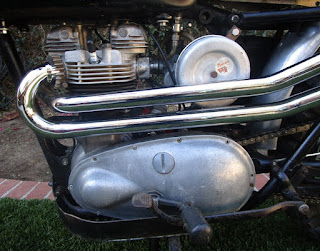 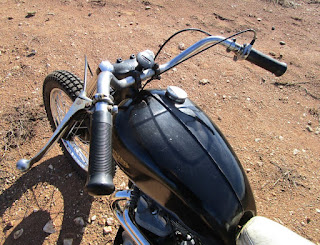 Essential for any Desert Sled it a sturdy Bash Plate to protect the Cases from rocks and such like. This one was made by Bast Brothers who were a Welding outfit in Van Nuys here in SoCal. Tons of drilled holes to lessen the weight of what is a heavy old piece of steel. The Side Stand lug has to be removed to use this. 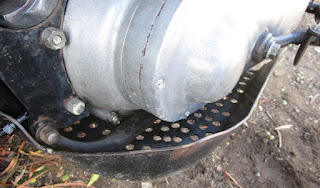 Triumph did not produce folding pegs until the 1960's so desert racers converted stock pegs to folding. Bates rubbers were screwed in place. 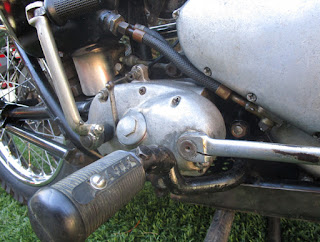 Amal Carburetor top cover has a waterproof cover, pretty pointless in the desert but it looks the part. 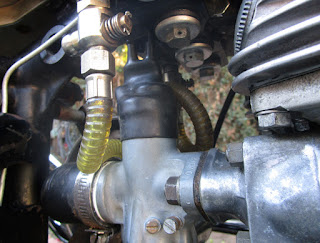 Original Lucas K2F Magneto was sent out for reconditioning. It did spark but I have leant from past experience that any old Mag will probably fail sooner than later. Once rebuilt they are extra reliable. 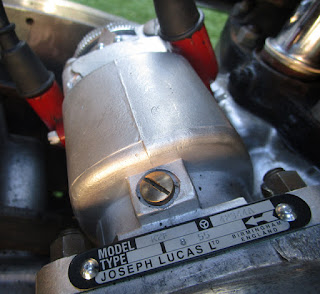 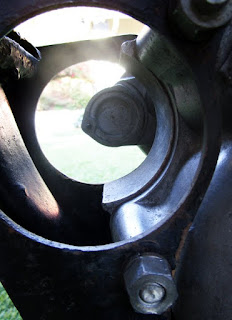 Out to the Dirt to for testing transported by my trusty "59 El Camino bike hauler. 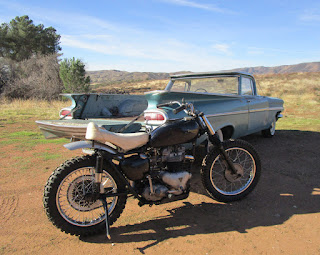 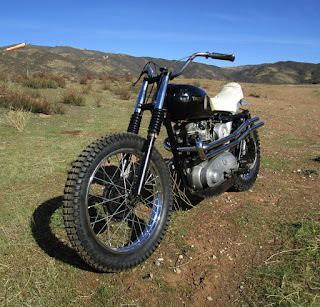 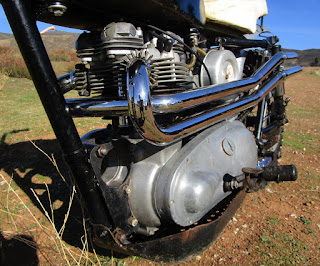 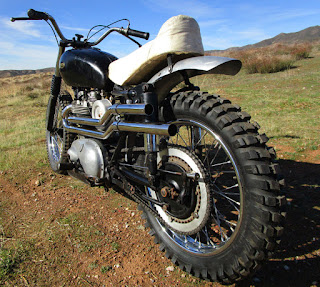 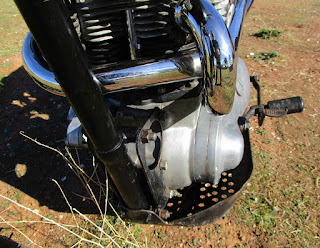 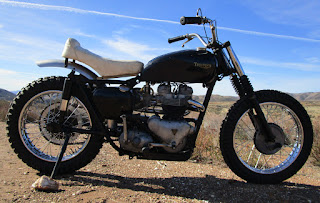 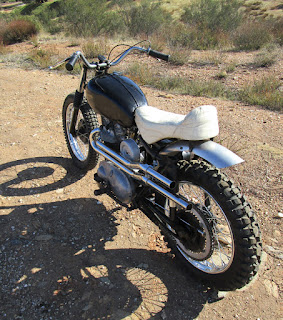 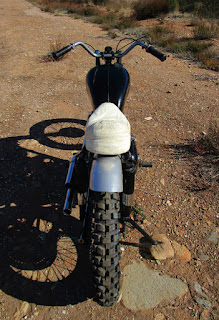 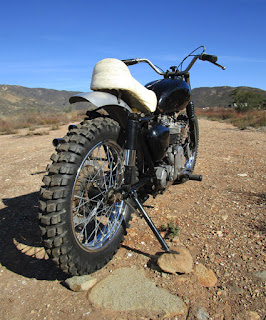 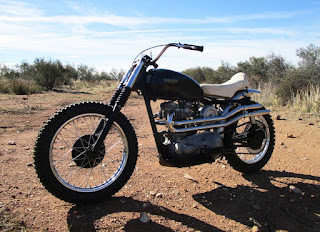 This bike is currently for sale, email me for more details tonup@sbcglobal.net 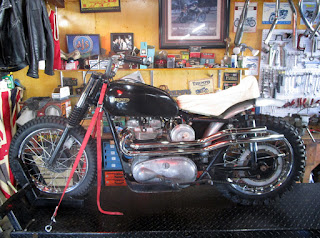 Posted by Jonnie Green at 12:04 PM No comments: